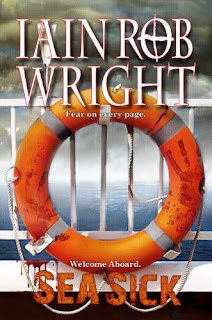 Sea Sick
Police Officer Jack Wardsley’s life ended the moment his partner died, stabbed to death by a deranged druggie. Now, years later, Jack is a changed man, with a head full of secrets driving him insane. His recent record of police brutality and a reputation for not following the rules has prompted his seniors to give him an ultimatum: take a few weeks off, relax, and find some way to let go of all the anger – or else find another job. That’s why Jack is about to board The Spirit of Kirkpatrick, a cruise liner built for relaxation and fun. Pretty soon, however, Jack realises that a little R&R is the last thing he’s ever going to get aboard the cursed ship. There’s a virus onboard, making people insane and bleeding from the eyes. The whole ship is overrun with blood and death, and there is nowhere to escape.  Just when Jack thinks his number is up and his life is over, he wakes up. The day is exactly the same. In fact, everything is the same. Jack is forced to witness the viral outbreak again and again as it ravages the ship and its passengers over and over, day after day. Jack finds himself trapped in a repeating hell.  It won’t be long before Jack realises there are others onboard just like him – and that some of them know more than they’re letting on.
Kindle Price: £0.00
Click here to download this book. 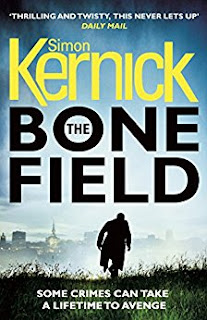 The Bone Field
When the bones of a 21-year old woman who went missing without trace in Thailand in 1990, are discovered in the grounds of an old Catholic school in Buckinghamshire, an enduring mystery takes on a whole new twist. Her boyfriend at the time, and the man who reported her missing, Henry Forbes, now a middle-aged university lecturer, comes forward with his lawyer and tells DI Ray Mason of the Met’s Homicide Command that he knows what happened to Kitty, and who killed her. So begins a hunt for the truth that will focus on a ruthless crime gang, a rich, dysfunctional family with a terrible past, and a highly ambitious man so cruel and ruthless that he must be brought down at any cost...
Kindle Price: £1.99
Click here to download this book.
Posted by Joisel at 4:00 PM