Seven Days of Friday
Thirty-four-year-old Vivi Tyler is living her nightmare: gay husband, self-harming teenager, melodramatic mother. They’re picking apart her sanity, one stitch at a time. She’s crawling along rock bottom when the arrival of a mysterious package opens a new door to a new country. A desperate Vivi dives headfirst into the quicksand that is Greece—her parents’ birthplace. But it’s a paradise far from perfect, and instead of the new beginning she covets, Vivi discovers trouble is determined to keep her in its pocket. Soon she’s fighting for her daughter’s life in a Greek hospital, clashing with her Greek relatives, and cobbling together an inadequate cage around her heart, lest she fall for an unavailable man.Before this story ends, somebody will be dead. And if some people are to be believed, this particular death is a good thing. A blessing, of sorts . . . .
Kindle Price: £0.00
Click here to download this book. 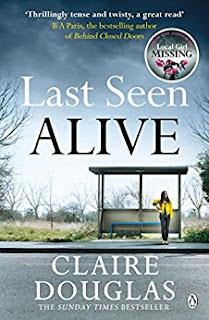 Last Seen Alive
The Hero
Libby Hall never really wanted to be noticed. But after she saves the children in her care from a fire, she finds herself headline news. And horrified by the attention. It all reminds her of what happened nine years ago. The last time she saw her best friend alive.
The Swap
Which is why the house swap is such a godsend. Libby and her husband Jamie exchange their flat in Bath for a beautiful, secluded house in Cornwall. It's a chance to heal their marriage - to stop its secrets tearing them apart.
The Hideaway
But this stylish Cornish home isn't the getaway they'd hoped for. They make odd, even disturbing, discoveries in the house. It's so isolated-yet Libby doesn't feel entirely alone. As if she's being watched. Is Libby being paranoid? What is her husband hiding? And. As the secrets and lies come tumbling out, is the past about to catch up with them?
Kindle Price: £1.99
Click here to download this book.
Posted by Joisel at 4:00 PM