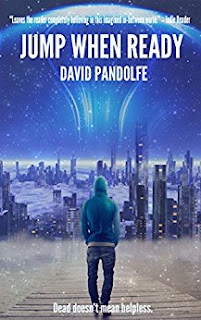 Jump When Ready
Since he drowned, Henry has remained with the same group of teenagers and he keeps wondering why. After all, what could he possibly have in common with a mohawk-sporting punker from the 80s, a roller skater from the 70s with a thing for kimonos, and an English "rocker" from the 60s? Add to that, Henry can hear the other groups but he never sees them. Soon, Henry learns that his new friends all possess unique skills for making themselves noticed by the living. Is Henry's group kept isolated because of their abilities? If so, are they considered gifted or seen only as a potential bad influence?  Before Henry can reach any conclusions, he witnesses his sister being kidnapped. He knows who did it, where she's being held and what will happen if the kidnappers don't get what they want. As the police chase false leads, Henry comes to realize that he's his sister's only hope. But for Henry to even have a chance, he has to convince a group of teenagers that dead doesn't mean helpless.
Kindle Price: £0.00
Click here to download this book. 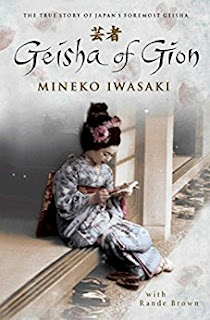 Geisha Of Gion
Celebrated as the most successful geisha of her generation, Mineko Iwasaki was only five years old when she left her parents' home for the world of the geisha. For the next twenty-five years, she would live a life filled with extraordinary professional demands and rich rewards. She would learn the formal customs and language of the geisha, and study the ancient arts of Japanese dance and music. She would enchant kings and princes, captains of industry, and titans of the entertainment world, some of whom would become her dearest friends. Through great pride and determination, she would be hailed as one of the most prized geishas in Japan's history, and one of the last great practitioners of this now fading art form. Mineko Iwasaki tells her story, from her warm early childhood, to her intense yet privileged upbringing in the Iwasaki okiya (household), to her years as a renowned geisha, and finally, to her decision at the age of twenty-nine to retire and marry, a move that would mirror the demise of geisha culture. Mineko brings to life the beauty and wonder of Gion Kobu, a place that "existed in a world apart, a special realm whose mission and identity depended on preserving the time-honored traditions of the past." She illustrates how it coexisted within post-World War II Japan at a time when the country was undergoing its radical transformation from apost-feudal society to a modern one.
Kindle Price: £1.99
Click here to download this book.
Posted by Joisel at 4:00 PM